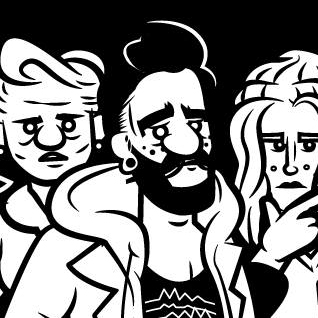 Precisely one year after the launch of 2014’s STORM CLOUDS, Ben Mitchell is kicking off his graphic novel sequel DON’T PANIC at Curve Gallery for two days only. The opening night on March 13th will be the first opportunity to purchase a copy of the 60-page risograph printed comic book, but will also feature the entire book (and last year’s comic) as an installation on the walls of the gallery for you to read (painstakingly) free of charge. The shop will open again on March 14th, for those who couldn’t make it (or keen enough for more) for a live and intimate reading of excerpts from the new comic. Several limited items will be available following last year’s sell-out opening night, so this will not be an event to be missed!

ABOUT DON’T PANIC
“The plot truly thickens in Don’t Panic, the tantalising follow-up to Storm Clouds. Mitchell’s wry eye is cast over not just the hardcore music scene and middle-class Gen Y angst, but also a compelling and seedy murder mystery. ” – Nick Milligan, Sci-Fi novelist
“There are a lot of pieces still to put together, this is a pretty ambitious series. But Don’t Panic has solidified my faith that Mitchell knows what he’s doing. Great work.” – Amy Maynard, Writers Bloc
STORM CLOUDS (2014) followed detectives Adrian Rose and Nadia Chino to the small town of Bontown, on the hunt for the notorious Party Killer, a masked murderer hunting down police officers in nightclubs statewide. The main suspect was the now-missing Jared Paige, a past lover of Nadia’s, and their search to his hometown only brings up more questions. Is Jared Paige the Party Killer, or does the killer stand for something much bigger and darker going down in Bontown?

DON’T PANIC (2015) jumps back several years to 2011, this time revisiting Bontown from the perspective of Jared Paige before he was a wanted man. The suffocating anxiety endured by Jared has been brought to an all-time high in the wake of the farewell show for his infamous hardcore band, Chances, and the lingering remorse for turning his entire city against Nadia Chino. As the public image he has built for himself feels more and more like that of a stranger, the future-fugitive is ready to snap. The story begins to bridge the gap between Jared Paige, hardcore barista and Jared Paige, anarchist assassin, as the dark secrets behind Bontown’s small community grow deeper and more mysterious.